[UPDATE Naomi Parker Fraley passed away in January of 2018. We miss her so much.]

What if I told you the “real” Rosie the Riveter was alive and well and living in California? Meet Naomi Parker Fraley, over 90 years young! She is the real inspiration behind the famous “We Can Do It!” WWII poster. Here’s the story…

“We Can Do It!” is a WWII-era propaganda poster created for Westinghouse Corporation by artist J. Howard Miller, and has in the years since become a pop culture icon commonly interpreted as an image of Rosie the Riveter. Although little-seen during WWII, this poster is much-celebrated in our time, and its popularity continues to grow as it appeals to new generations. And although not originally labelled in any way as “Rosie the Riveter” the “We Can Do It!” gal has now become arguably the most well-recognized and definitive image associated with Rosie the Riveter.

A Press Photo, And A Mistaken Identity

Many news outlets have memorialized Michigan war worker Geraldine Hoff Doyle as the inspiration for the famous “We Can Do It!” poster. These news stories relate that Mrs. Doyle recognized herself in a 1942 UPI press photo of a female worker wearing a polka dot bandanna, a photo that had been posited as the possible inspiration used by Miller in creating his famous poster.

But what if I told you that inspirational photo is not of Geraldine Hoff Doyle, who has sadly passed away, but a photo of war worker Naomi Parker Fraley, who is alive and well and living in California? I bet you’d be as happy as I am to know that “the real Rosie the Riveter” is still with us!

For many years, Geraldine Hoff Doyle was routinely included in this group of “real Rosies,” whose face was the inspiration for the “We Can Do It!” poster which has become so strongly associated with Rosie the Riveter. This connection had its genesis in 1984, when Mrs. Doyle saw a reprint of a UPI photo (pictured at left) of a young war worker in polka-dots in Modern Maturity magazine and “recognized herself” in both the photo, and the poster (which was in the process of being rediscovered and gaining fame throughout the 80s.) Mrs. Doyle had worked briefly during WWII at American Broach in Ann Arbor, Michigan on a metal press machine, and recalled that one day a news photographer snapped photos of her working… and she was certain this was one of the photos. Overeager journalists picked up the story without fact-checking the identity of the young woman in the photo, which was probably much harder to research in the pre-internet 80s and early-internet 90s.

However, with increasing digitization of historic materials, the identity of the girl in the 1942 UPI photo has recently been proven to be another woman, Naomi Parker Fraley. Corbis has cataloged the photo online as part of the Bettman Historical Archives, and the National Parks Service Rosie the Riveter Museum features the actual 1942 news clipping in its online collection. The photo can be found in March, 1942 issues of a least 4 major daily newspapers digitized online: The Oakland (CA) Post Enquirer, the Twin Falls (ID) Times News, the Milwaukee (WI) Journal, and the Albany (OR) Democrat-Herald. In each case, the photo is clearly captioned as Naomi Parker (not Geraldine Hoff), taken at Alameda Naval Air Station (not American Broach) in California (not Michigan.) In addition, the Twin Falls caption describes the machine as a vertical turret lathe (and not the metal stamping press that Mrs. Doyle worked on.)

Since Mrs. Doyle never claimed to have met or sat for J. Howard Miller, but only claimed to recognize herself in the UPI war worker photo… and since the UPI photo is proven beyond a doubt to depict Naomi Parker Fraley, we must conclude that Mrs. Doyle cannot be the inspiration for the famous poster. That claim to “Rosie” fame now transfers to Naomi Parker Fraley.

Mrs. Fraley recalls her father walking her down to the Alameda naval air base in early 1942 to apply for a war job. He told her that she needed to do her part for the war. She was part of a vanguard of 50 women hired to work in the machine shop there, with plans to soon hire 300 more. Shortly after she was hired, in April of 1942, Alameda was where the USS Hornet docked to load up the 16 B-25 bombers that were soon to take part in the famous Doolittle raid on the Japanese mainland.

(Note:  Please do keep in mind that by taking war production jobs as a youngster of 17 as a metal-stamper and then a timekeeper, Geraldine Hoff Doyle like many women and girls served with valor on the Home Front during WWII, and she undoubtedly made an honest mistake regarding the photograph at a time when the all-seeing internet was not available. Geraldine and Naomi, both stunning brunettes, did resemble each other, as well as the face on the poster, so the mistake on Mrs. Doyle’s part is understandable.)

So Why Is This Important?

“We Can Do It!” is a beloved cultural icon. The press and public interest in putting a real face and name to the iconic character of Rosie the Riveter remains high, as evidenced by the frenzy of interest in Mrs. Doyle’s passing in 2010, and the passing of Rockwell’s sitter, Mary Doyle Keefe in 2015. How much more satisfying to celebrate one of these “real Rosies” who played a critical a part in defining the beloved icon, while she is still with us, as Naomi Parker Fraley is, and can share her recollections?

The idea of a possible or likely real-life inspiration for “We Can Do It!” gal has taken hold of the public imagination and resulted in a flood of news articles over the years. The erroneous identification of Mrs. Doyle as the subject of the photo, and therefore inspiration for the poster, has been reported as fact on NPR, the New York Times, the UK Guardian, the Washington Post… and continues in news articles still to this day. It seems important to correct an error regarding something that is clearly very important to people. If anyone is to be credited as Miller’s inspiration, it is Naomi Parker Fraley, and the best part is she is still alive to share her experiences with a generation that is keenly interested!

I’ll be the first to admit that the relationship between the UPI photo and the famous poster was only ever conjectural, and we will never know for sure since J. Howard Miller died before anyone could ask him. But as to the identity of the worker in the UPI photo, case closed, so let’s set the record straight where we can. With members of WWII’s Greatest Generation lost every day, and young girls daily looking up Rosie the Riveter and “We Can Do It!” for inspiration and to write reports, it’s important to get the story right.

Many WWII Rosie the Riveters Are Still Among Us… Let’s Celebrate Them!

Of course, the larger, more important truth is that all of these ladies, and many more besides, are “The Real Rosie the Riveter.”

Any plucky American woman or girl whose work helped the Allied effort in WWII was dubbed, then as now, “Rosie the Riveter.” Whether she was Wendy the Welder, Tillie the Typist, Betty the Bucker, or Acetylene Annie, she’s a “Rosie.”

She might have conducted a streetcar, operated an elevator, run a scrap metal drive, rolled bandages, or played in an all-girl baseball team or swing band, she’s a “Rosie.”

They’re in their 90s now, but they are still among us, with wisdom to share and stories to tell. I’ve had the pleasure of meeting so many, and love them all. You will, too!

Get together and find these women in your community and celebrate them. Thank them for their service on the Home Front, and for breaking down gender barriers so your daughters can choose any career they wish. Ask them what they were doing when they heard about Pearl Harbor, and what it was like to live through a time when the whole world was at war. Ask them what it was like to be young then, and what they did for fun. You’ll never regret taking time out to honor your heroes.

And you’ll always remember the day you met “Rosie!”

Learn more about “We Can Do It!” girl Naomi Parker Fraley at naomiparkerfraley.com

Learn more about the complete history of the beloved “Rosie the Riveter” WWII propaganda character at PopHistoryDig.com

Learn about Rose Will Monroe of movie newsreel fame, the woman most often credited as “the Real Rosie the Riveter.”

Socialite and philanthropist Rosalind Palmer Walter is still alive [UPDATE: Mrs. Walter passed away in 2020] and head of an eponymous charitable foundation, and she sits on the boards of many prestigious organizations.

Rose Bonavita Hickey was interviewed in the 1980s about her experience as a record-setting riveter and her return to homemaking after the war, and you can read her bio here.

11 thoughts on “Naomi Parker Fraley, The Original “We Can Do It!” Gal” 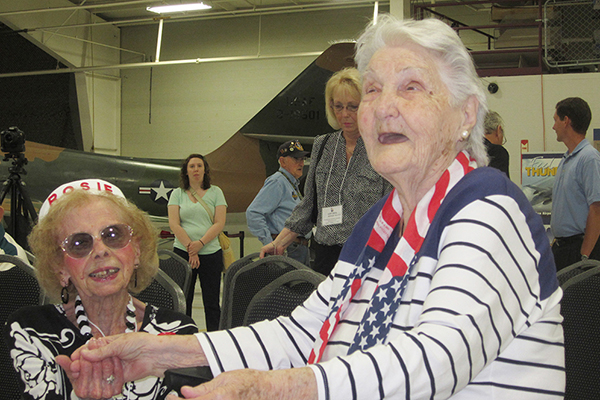 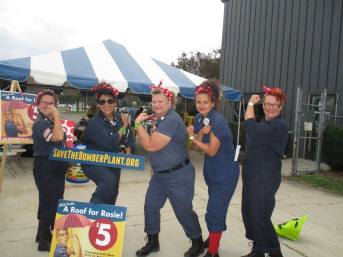 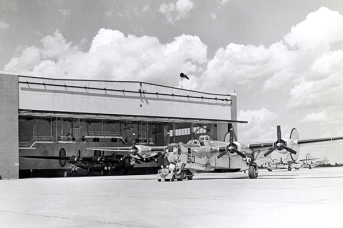 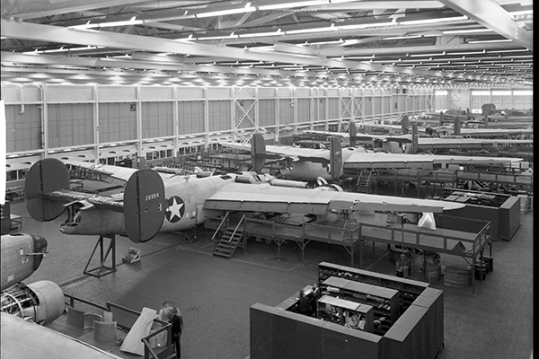 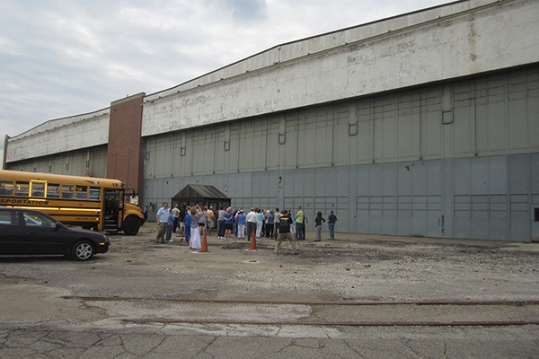